Recent TRIP to the places I lived in the Netherlands 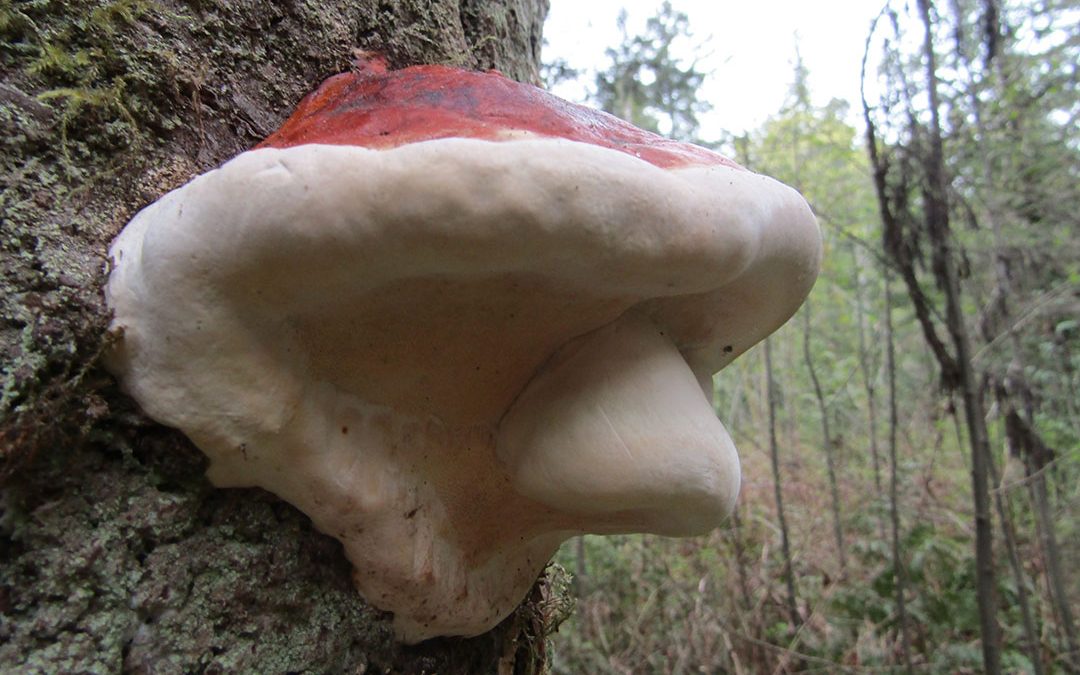 Once upon a time, home was:
ENSCHEDE (Overijssel province) in the far eastern corner of the province, the area known as TWENTE, back to back with a similar area across the national border in Westphalia, Germany.

* cherished memory:
— feeling privileged from the start to have landed a job that allowed me to make my home in this lovely corner of the Netherlands with its characteristic pleasing landscape, traditional wood-gabled farm houses, lush pastures sheltered by hedgerows, alternating with forested areas that harbor sand roads suitable for riding and driving horses, as well as offering firmed sand-trails to walkers and cyclists. My work place allowed employees to keep to a sliding work hours’ schedule of our own choice, and I spent many early hours before going to work on summer mornings cycling those roads with my dog, Sandor.
— it didn’t take me long to get to know and appreciate the laid-back, kind and hospitable people of Twente, some keenly aware of family roots they had going way back in history, with documented connections to a specific still existing farmstead.

** not so cherished? :Ah, what’s not to like about this place? If I try hard, I remember the one thing I grumbled about: summary public transport links — VERY summary at that time — with the Netherlands outside Twente, let alone the German ‘hinterland’ east of the border — a price one frequently needs to pay for the privilege of living in less crowded, less urbanized areas of our world.

Once upon a time home was:
AMSTERDAM (North Holland province) : city by the Amstel river, capital of the Netherlands

In roughly half of the Netherlands the land is below sea level. Its groundwater levels are tightly controlled by modern pumping stations (successors to the traditional wind-powered pumps, a.k.a. ‘Dutch windmills’ here and there still present in today’s landscape). To prepare for construction in these soft sedimentary soils long poles were, and still are, driven into the soil down to firmer layers underneath the sediments. Most of Amsterdam, for example, ‘is built on poles.’

*cherished memories:– morning commutes to university lectures in early summer on my bicycle cutting through the Vondel Park, most celebrated city park of Amsterdam. It was 1968. Free-spirited young people from all over the world inhabited the park, camping out on the lawns, dancing, singing, making music or sleeping in late. I admit: every time I cycled through the park that spring, and out again through the wide-open monumental ironwork gates — music fading behind me — I asked myself, did I really, REALLY want to continue pedaling on to the Leidseplein and beyond, to the distinguished old canal house on the Keizersgracht where the law faculty was housed at that time? Then again, I had lectures to attend, examinations to take…

** not so cherished:– grasping the chance for some window shopping during lunch break, heading with other women students for the Bijenkorf (Bee Hive) department store on the Damrak, taking a shortcut through some back alleys, we speed-walked to be spared the full load of verbal abuse, interspersed with uproarious laughter, descending on us from open windows overhead where ladies of the night — at leisure this time of day — amused themselves at the expense of us, primly dressed little women rushing by for a short break before zipping back to dusty books and lecture rooms.

Once upon a time home was:
ROERMOND (Limburg province), where the river Roer runs into the Maas (or Meuse)

* cherished memory: — we arrived after shutting the door of our upstairs apartment in Groningen and surviving a long day on the train heading south, delighted (we, children) to find at the other end a big detached house waiting for us with a large garden, and our dog loving mother pronouncing that it was now time to add a dog to our household — in the shape of our ( long-lived) Irish Setter, Oscar. — school also became fun here in a class full of kids ‘immigrated’ from more northern parts of the country, talking as a result in many different accents as did fellow students from overseas who joined the town’s protestant legion from the Moluccas in the East Indies, now the Republic of Indonesia. They (rattling among themselves in Malay sometimes) also spoke our common language in their own way as we all did, and nobody paid any mind as long as we understood each other.. We ( newcomers to Limburg hailing mostly from provinces north of the Rhine river) and our Moluccan friends bonded together nicely. Four other children in our just out of town neighborhood joined me daily on foot (all of us too young to brave the traffic riding our bikes to school) making our way to the town center in a protective little convoy — the more the merrier — occasionally running a gauntlet of Roman Catholic kids before we reached our sanctuary, the only Protestant school in this town.

** not so cherished memory: one day we were singled out in public as little heretics on our way back home from school. We came across an annual procession in honor of Maria Stella Maris, with the local bishop in charge. When the statue robed in azure came floating by, every spectator around us went down on his or her knees leaving us, protestant brood, conspicuously upright on our feet. The street became deadly silent when Monseigneur L, grey-haired little man decked in purple, halted the procession’s progress. He turned to us and wanted to know why we weren’t on our knees to pay our respects to the saintly figure carried past, and we, voices slightly trembling, explained that as Protestants we weren’t supposed to. A young man on his knees beside us hissed from street level by my feet , ‘you idiots,’ but the bishop, appearing satisfied to have made his point, waved his hand and the procession resumed.

Once upon a time home was:
GRONINGEN (Groningen province): provincial capital and major city in North Netherlands. 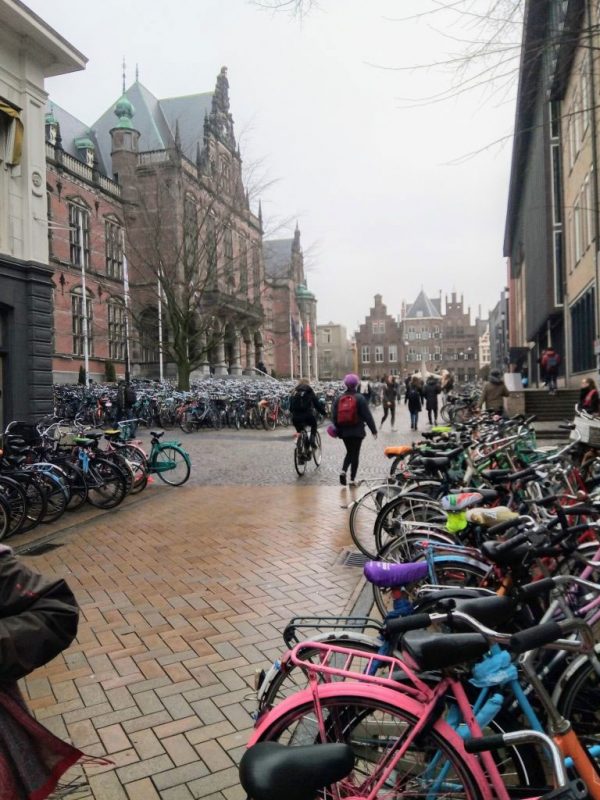 * cherished memory: — Riding as a 4 yr old in 1948 with my family in a rented horse drawn carriage to the city center and witnessing the festivities (fireworks!) at the inauguration (monarchs in the Netherlands are not ‘crowned’) of Queen Juliana, grandmother of today’s King Willem-Alexander. — Another cherished memory: admiring the beautiful carriage horses (of the Groningen breed) going through their paces in the city park on occasion of the annual celebration on August 28 to commemorate the end of the city’s siege (August 28, 1672) by the bishop of Muenster, Bernhard von Galen (nick-named in Groningen, ‘ Bommen Berend’)

** not so cherished: At school in 2nd grade being harassed by classmates who took exception to my ‘different’ way of speaking — our parents did not encourage my brother and me to use Groningen vernacular.

a few photos (NOT from my lost camera…) of Groningen’s iconic ‘Martini’ church tower, locally referred to as ‘the old grey one’ plus–Painting by Otto Eerelman of pre-war celebration of August 28 in Groningen’s market square; the painting features (according to my horse-loving mother) TABOR, ‘Orlov Trotter’ stallion then recently imported from Russia, approved for stud services by the Groningen horse registry. 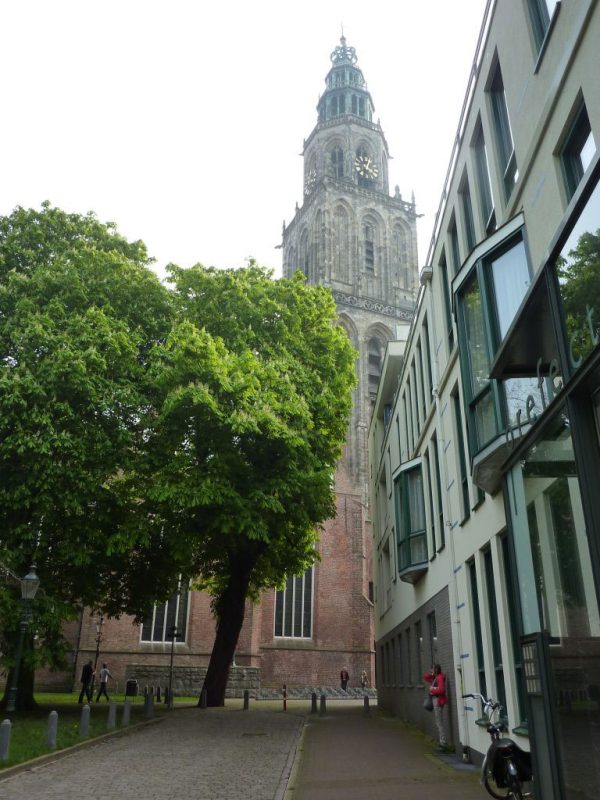 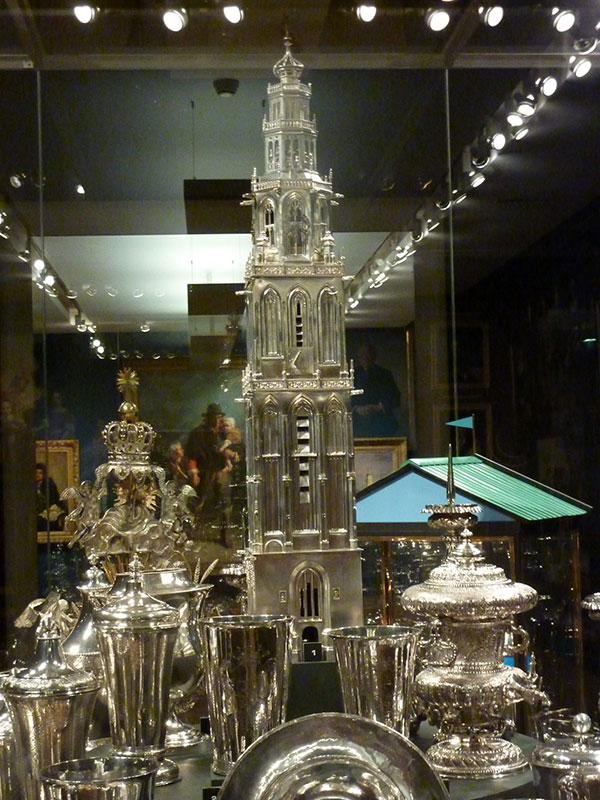 once upon a time home was:
DEVENTER (Overijssel province), old Hansa town by the river IJssel. 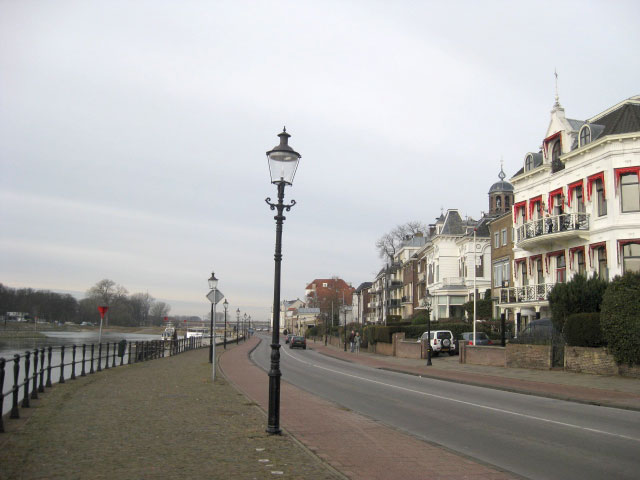 *cherished memory — I was 2 yrs when we moved to another town, so the following memories are hand-me-downs from parents and ‘oma’ (gran) who lived with us during WWII after Oma’s home was taken over by German occupying forces to house officers. Oma recalled trying to cross the river bridge back into Deventer town with bicycle bags full of fresh produce purchased at farms in the countryside across the IJssel. In her best German (learned as a child traveling across the border with her dad on his business trips to Germany) she explained why she couldn’t show the distribution coupons needed to make her purchases legal. The coupons weren’t enough to cover the family’s needs, she said to the young man in uniform. She had a sick child at home she said (‘ein krankes Kind zu hause’), referring to my infant self, a strapping baby by all accounts…

** not so cherished memory — family lore brimming with accounts of scary moments while committing actions deemed illegal by the regime. Other tales dealt with the hazards of active warfare encountered by civilians such as my dad and others ducking in and out of manholes along the river road to avoid strafing by Allied aircraft, price to pay for venturing out to bring home veggies (and tobacco) from the garden plots tended by townsfolk by the river. 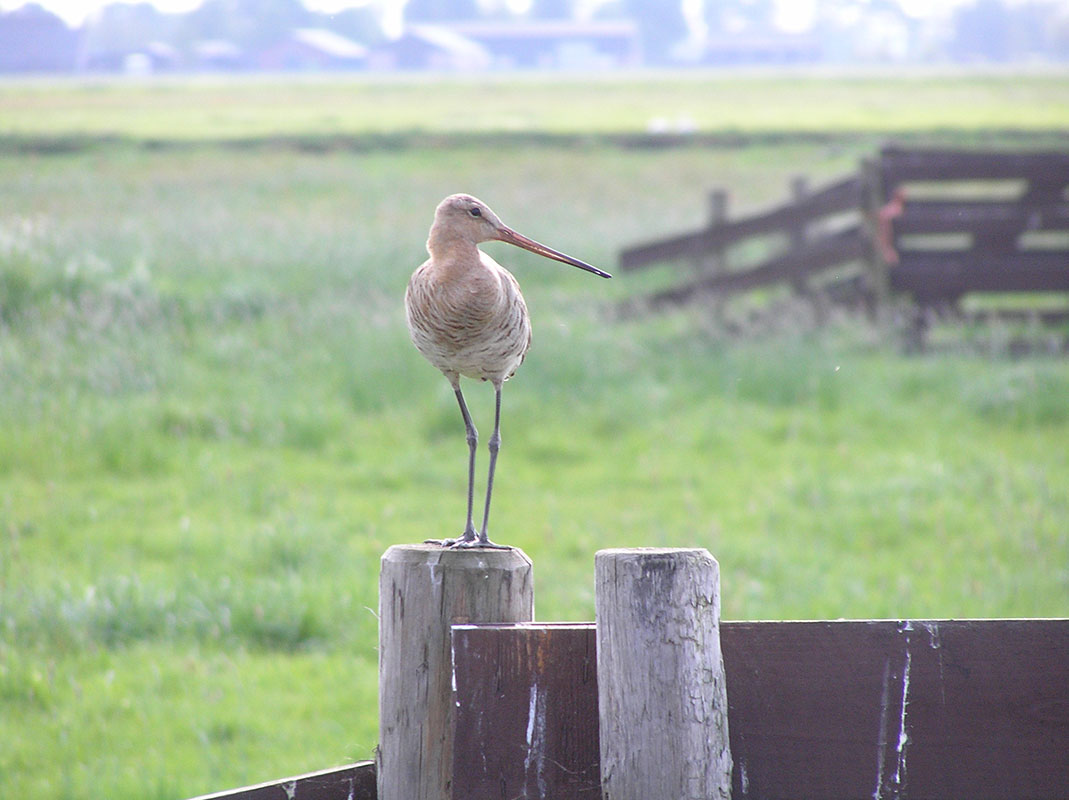 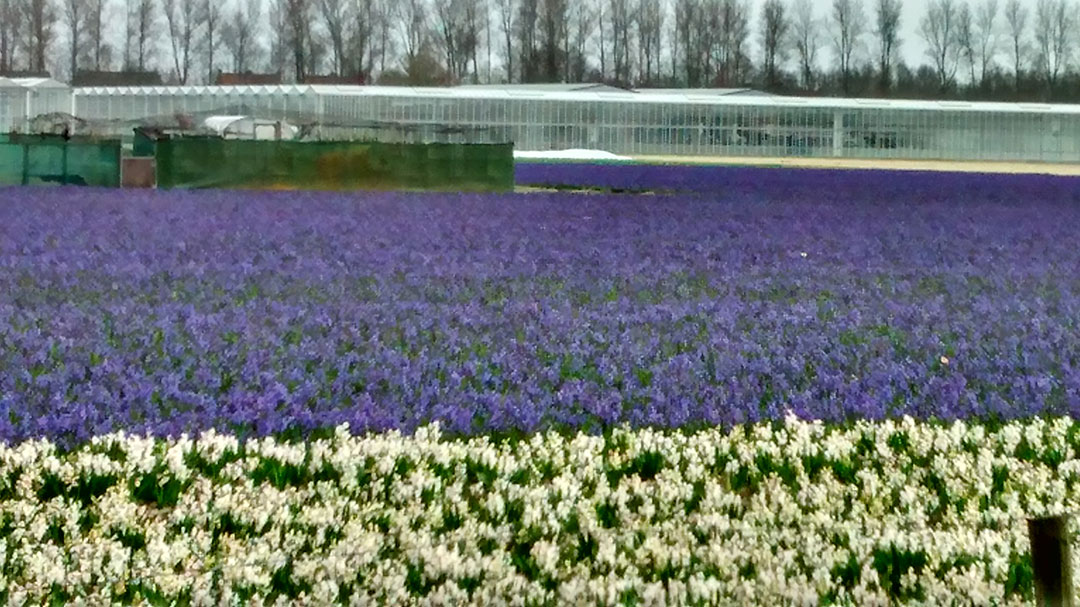 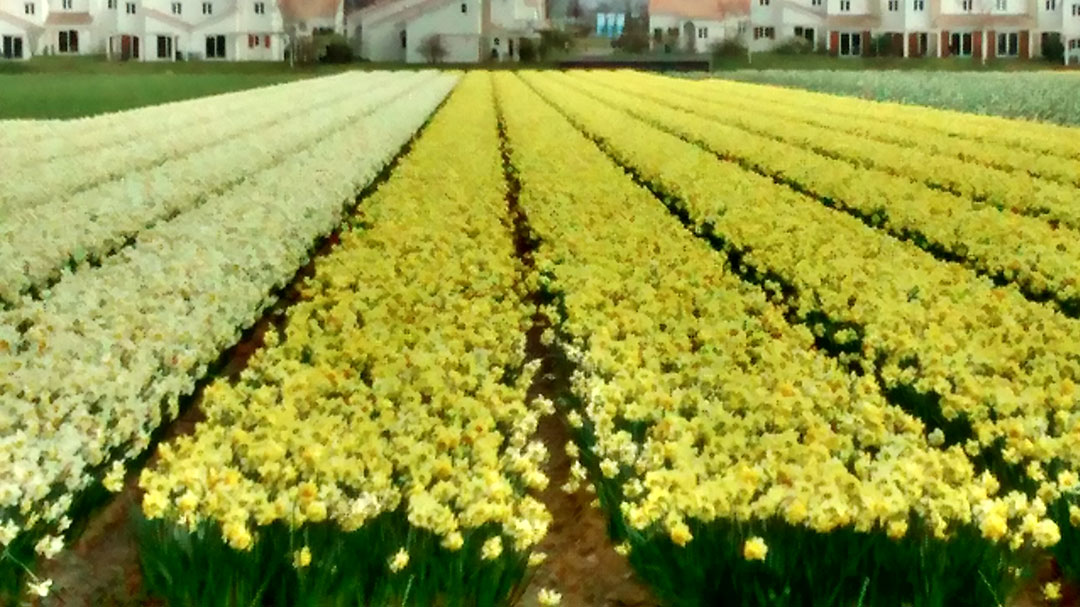