The Storks Came Back

A boy grows up in Denmark under Nazi occupation

Join me in a journey back into time (WWII) set in Denmark. 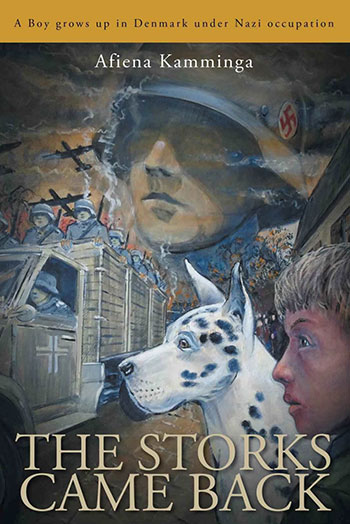 In April 1940 when his country, Denmark, is invaded and occupied by Nazi Germany, seven year old Morten has no idea how his life and that of his family and all other people in Denmark is about to change. School is interrupted. Danish Resistance against the German occupiers grows stronger step by step. Morten, eager to join the local branch of the Underground resistance movement, is told that he is too young to get involved. Five years later, now twelve, he is still told the same thing. The Danish resistance is sabotaging railway transports to prevent German troops from heading south to reinforce Hitler’s troops fighting the Allied on the Western front.

When a German search party is about to discover an explosives stash of the local resistance, which includes Morten’s family and friends, Morten devises an ingenious plan to save the day. Aided by a friend and his dog, he spirits the explosives away against all odds, including German road blocks, saving the lives of the local resistance fighters involved in the sabotage team.

Kamminga writes a well-observed story of a less-explored World War II experience: occupied Denmark. Unlike other, more harrowing accounts of children in hiding or in concentration camps, this tale focuses on Morten’s adaptability to changing circumstances and the Danish-ness of his life: for example, the king, on his daily ride, exchanges greetings as between equals with the postman. Kamminga makes the story’s episodes—learning about the procedures of the Resistance and sabotage, how to make arrows from elderberry whips, dog training—both interesting in themselves and contributory toward the boy’s coming-of-age. The book is also balanced; the chief bully in Morten’s life is a Jewish boy, and the Germans aren’t cartoon villains. A well-written, thoughtful portrayal of surviving hard times during World War II.

I loved her first book the “Sun Road” and was eagerly waiting for her next work to come out. It did not disappoint!! The author has such a wonderful way with words. Even though this story has a very different theme and is aimed at a young adult audience – but i do think it is a book for all ages – it is written in the same spirit of authentic genuineness and zest for life. I was drawn into the story right from the get go, intrigued by the characters and wanting to find out more. I enjoyed the fact that animals played a role in helping move things along and contributed to the effort of the war resistance. The everyday hardship, the fear and horror of war is well depicted but at the same time presented with a light touch, appropriate for the younger readers, and an appreciation for community, friends and family, always letting love and hope shine through. Surprised and delighted to find out in the end who saved the day. Put this one on your wish list!

A book for “young adults?” I am a “senior adult” and I very much enjoyed this book. I grew up during the Nazi time in Germany, and to read about the Nazi invasion in Denmark was interesting. The boy Morton and his dog, his sister, mother, and father are characters well developed in this fictional story, loosely based on Afiena Kamminga’s husband’s life. As you get deeper into the story, you feel as if you are part of their life and their community. I was waiting to find out what the storks had to do with the war, the occupation, and the resistance. I shook my wise old head, I was a kid again, I was in with the smart boy who used the stork’s nest for an incredible feat. I do not want to give away too much, but this book, intended to entertain and educate young adults is opening the eyes for the perils of war – even if you don’t live in an active fighting zone. Yes, I would recommend anyone interested in European war history to read it.