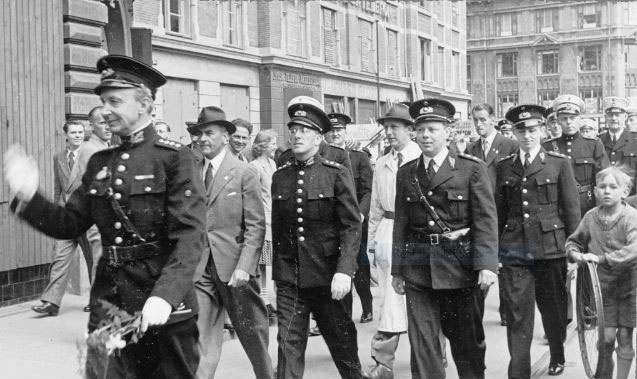 His first days in post-war England, remembered by a Danish student-visitor who worked for the summer on an English farm.

It was a nice May evening, and I had just arrived on a small farm in England as an agricultural exchange student from Denmark. After milking the farm’s thirty-and-some Ayrshire cows in the field, I had come back to the farmhouse looking for dinner. But there was no such thing waiting for me, the already forgotten ‘hired hand’ from abroad. My employers, a couple who owned the farm and ran it (off-handedly) as a sideline to their publishing business, had gone out to visit someone.

Fortunately I had my own wheels – my trusted black bike had traveled with me on the ferry from Esbjerg in Denmark – and so I went into nearby Lambourn Village looking for a meal, only to be disappointed again: every eatery in the village was closed.

How about the village bakery? It was also closed. “Open till noon” it said on the notice in the window. I shrugged, turned around, and was headed back to my bicycle when I was halted in my tracks by a policeman who eyed me, a foreigner, with suspicion.

He asked what I was doing and where I came from. I told him I was an exchange student just arrived from Esbjerg to help out on a farm near Seven Barrows, and I was looking for something to eat after milking the cows for my new employers.

When he heard the word Denmark, the policeman’s hard stare softened. He invited me promptly to his house across the street where his wife treated us to tea with assorted biscuits and cakes.

Over tea the policeman told me about his involvement with WWII. The war, ended eight years before, had left scars in people that were still fresh in those days. This policeman was still trying to come to terms with what had happened to him.

When the British army was evacuated from the beaches in Belgium, he and other members of his police unit were sent to Dunkirk to help with the operation. In the haste and confusion, he and others were left behind on the beach and take captive.

Unlike members of the military forces, those in the police force when captured didn’t qualify as POW’s, and so he was sent straight to the Buchenwald concentration camp, where he languished from late in 1939, to the fall of 1943, emaciated and depressed, barely surviving on the scant food handed out to the prisoners. Adding to his depression and poor health was his deep sense of loneliness. Ignored by the guards, as well as his fellow prisoners – an ever changing crowd of captives from East Europe, unable to speak English – he felt profoundly abandoned. In September 1943, he was left to live all alone in his barrack, after his fellow prisoners from the east had been moved out as a group.

For days he remained the only one left in the barrack. Forgotten by the camp administration, he received no food at all, not even he standard camp swill. He began to prepare for death.

A few days later he woke up to a lot of noise, shouts and footsteps and slamming of doors. Suddenly he was surrounded by a throng of tall burly men in black uniforms noisily moving in. The men were quick to get organized and everyone took part in what seemed to be a standard physical workout practice. Afterwards, they returned to the lonesome prisoner in his worn British Police uniform. Among the newcomers were a few who spoke a little English. He soon learned that his new companions were policemen from occupied Denmark, rounded up all over the country and sent here to prevent them from lending support to the Danish Resistance.

Among them was a police doctor who helped him recover his health over the next few weeks. He was fixed up with a Danish police uniform, and urged to join their daily workouts as soon as he was able to. They shared their food with him – supervised by police medics, who measured out his rations by small daily increases.

It didn’t take long before he recovered in body and spirit. He was now wearing a Danish police uniform and he carried a new set of ID’s made in the barracks by a policeman with special skills. He went out with the others for role calls unquestioned, for it seemed that the British policeman rounded up on the beach at Dunkirk had been permanently forgotten by the camp’s administrators.

In 1944 the Swedish Count Folke Bernadotte arrived with staff of the International Red Cross and an assortment of white busses and trains. German authorities had agreed that the Danish police were allowed to depart for Sweden, to remain there until the end of the war. While the train rolled through Denmark on its way to Sweden, many of his Danish friends jumped off the train to join the Resistance, and others continued to Sweden where they helped to form the Danish Brigade – a liberation unit armed and organized in Sweden.

The lone British police officer regained his proper identity and returned to the UK.

I never met the policeman again after I left his house that day. I gave notice to my negligent Lambourn employer and moved to another farm a short distance away near Wantage. My move caused a small – potentially not so small – problem because my work-permit was only valid for Lambourn. I was quickly immersed with the farm work in my new place of employment, this time enjoying the hospitality of a friendly, welcoming, (authentic) farm family. I worked there for several weeks without a work permit.

Then, one day when I arrived home for lunch, a very small car rolled into the yard with a very tall and slim Police Constable at the wheel. He handed me a fresh work-permit and explained, “Thanks to the Constable in Lambourn, you’re now legal again.”